Unfortunately, real life has gotten a little bit in the way the last month or two, so I've not picked my blogging back up at the pace I would like.  However, things are getting back to normal, so I hope to do this a little more regularly.  I did manage to squeeze in time to make the annual pilgrimage to Lancaster, PA for the World Boardgaming Championships from Thurs-Sunday, though.  I took some notes - but have since lost those, and I didn't do a good job with picture-taking this year (I will be glad to see Summer 2014 come to a close...it's been challenging, and I've been off my game).  So, I'm going to do my best to give a brief recap, with some thoughts on WBC in general. 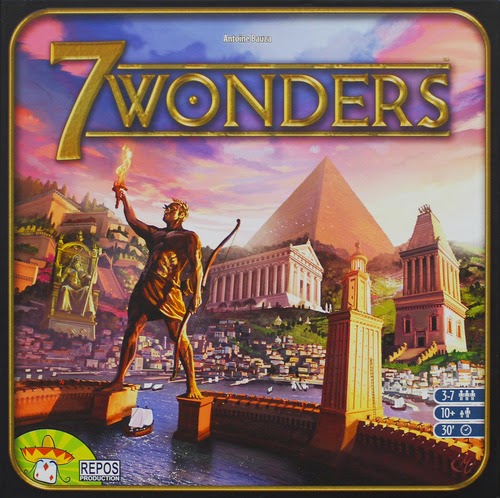 My friend Paul Owen and I headed up early Thursday morning.  We got there around 10ish, and headed in to the Lancaster Host.  I thought about playing Stone Age, however I decided to play Thurn & Taxis, which I don't get to pay often...in fact my last play was last year at WBC.  I was seated with 3 veterans, and had to ask for a quick rehash of the rules, which they provided.  The game went fairly quickly...it ended about a turn or two before I was ready and I finished in last place...however it was very close with a 5 or 6 point spread from first to last.  I was pleased with how I fared against 3 players who obviously were much more familiar with the game than I was.  Next up for me was a round of 7 Wonders.  GM Nick Ferris has a great randomizing method to seat people with unique cards he hands out to everyone, calls a row and column and everyone had their table and seat assignment.  My three opponents consisted of 1 fellow who was pretty experienced and 2 other folks who were fairly new to the game.  We played 2 games in an hour, and I finished 3rd in both, for an overall 3rd place.  In both games, I was hampered with lack of certain resources. 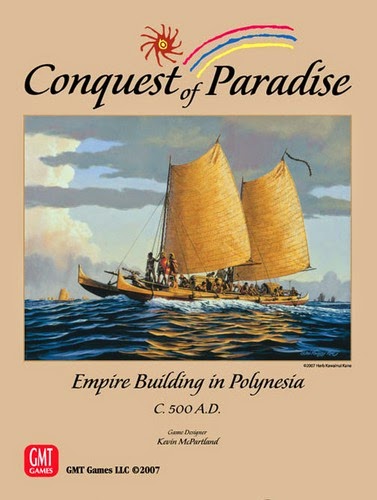 Paul didn't advance either and I tagged along with him to the Lampeter room where he was going to engage in some Wooden Ships & Iron Men.  I took the opportunity to relearn this game, and played against one of the experienced hands in a frigate duel.  As expected my experienced foe got the upper hand, I didn't adjust to the wind very well...but his hot  dice luck didn't help any.  Next up I took part in a heat of Navegador...another game I don't get to play often enough.  I concentrated on building churches, but my lack of investing in any kind of ships in the 2nd half of the game caught up to me in the end.  Still, I finished in 2nd, about 8 or so points behind the winner.  At 9:00 that night I participated in my first heat of Conquest of Paradise, which had been expanded to 4 heats this year.  As at Prezcon, we were playing with the advanced rules and random events.  My game went very quickly...we were done in under an hour.  As Samoa I started last, and my 3 opponents each found 2 or more islands on their first turn.  I only found found one, but I consistently found islands over the next several rounds, and was able to expand my Polynesian empire for a quick and bloodless win (there was no combat in the entire game). 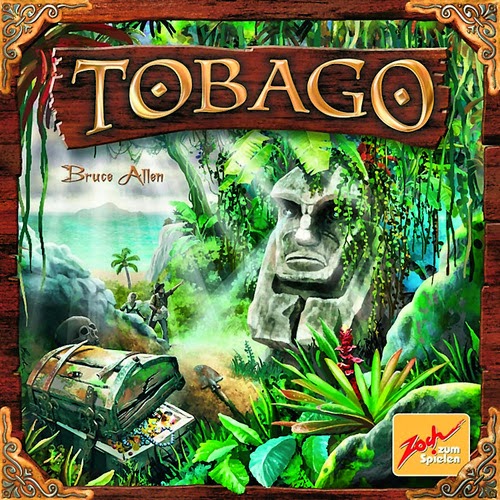 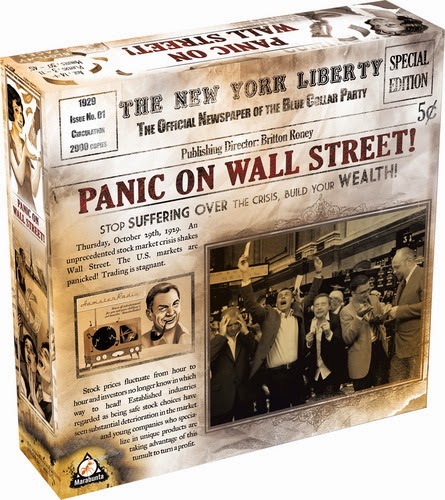 After that, Paul and I wen to the open gaming area where we found Peter Gousis and his friend Jerry and played a game of Tobago, a clever little game about finding treasure, where the location of the treasures is narrowed down in a sort of logical card progression by the players.  Peter had come to our Unpub Mini and I was glad to catch up with him.  After that we all joined several other players, including T.C. Petty III for some Coup, followed by Panic on Wall Street.  With Coup, we played with the Reformation expansion, where players are assigned to the Catholic or Protestant faction, and can't act against someone in their faction...although you can change someone else's faction.  It adds another twist to an already fun hidden role/deduction game.  We had played Panic on Wall Street last year, and I was kind of "meh" on the game, though as I recall I was very tired at the time.  This time we also started late, but I got into the game more...and manged to eek out a win as a manager by riding the high-risk shares. 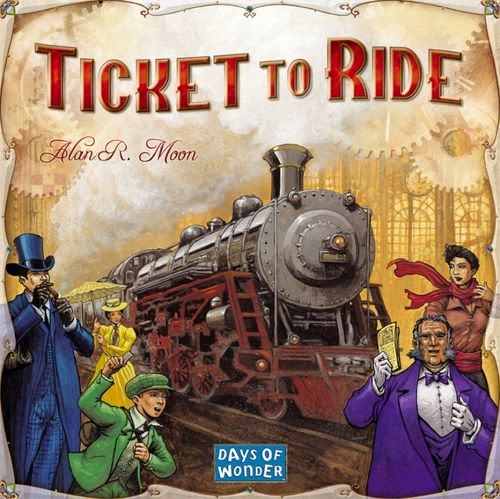 Friday morning came too early (all the mornings seem to come too early at these conventions...)  I briefly toyed with the idea of playing in the Circus Maximus heat, but decided to wait for the vendors to open at 10:00.  I made a beeline to the Stronghold Games booth in order to pick up the Die Fighter expansion for Space Cadets:Dice Duel.  (About a week later I had a package arrive at home...the copy of Die Fighter that I had forgotten I had pre-ordered...DOH).  I picked up a few other things as well - a copy of Caylus Magna Carta (the card game version of Caylus), Freedom:The Underground Railroad, of which I had heard many good things, and game called Quilt Show to use as a gift for a friend that is really into quilting.  I didn't actually sit down for a game until 1:00, when I decided to try my hand at a heat of Ticket to Ride.  I enjoy TTR but I haven't played in a tournament in years because it's so popular, and it tends to conflict with other things.  One player ran away with it at our table - I finished 4th...I might have finished higher but I knew I wasn't winning so went for the Hail Mary on the last turn and drew more tickets...none of them I had complete.  But I did get a set of translucent trains just for playing.

There was another heat of Conquest of Paradise at 3:00, but instead I decided to help Paul with a demo of East India Company he was giving to a publisher.  Now, I hadn't played EIC in a quite some time, and was eager to see the changes Paul had made.  He had streamlined it by removing the dividend track, taking out the Caribbean, removing the tariffs, and eliminating the option of using wood to build new ships.  The demo went well, I thought, although afterwards, on the drive home in particular, we brainstormed some about the game.  I thought Paul had actually removed too much, and we talked specifically about a way to add the tariffs back in, and possible some changes to how the pirates work.  Now, I will also admit that I had an ulterior motive.  This same publisher had contacted me after our Mini Unpub, specifically about Santa's Workshop.  I had sent him rulebook, but he had contacted me right after we got to WBC to tell me that it wasn't what they were looking for.  Which is fine, I'm happy he looked at it...and did take the opportunity to get his advice for 5 minutes or so after the EIC demo was done.  I specifically wanted to get his feedback on the theme...which had really gotten a negative reaction from a publisher at Unpub back in January.  This particular publisher thought the theme may be a bit of a tough sell, but he didn't think it was necessarily a deal breaker.  So, I was happy to get some feedback. 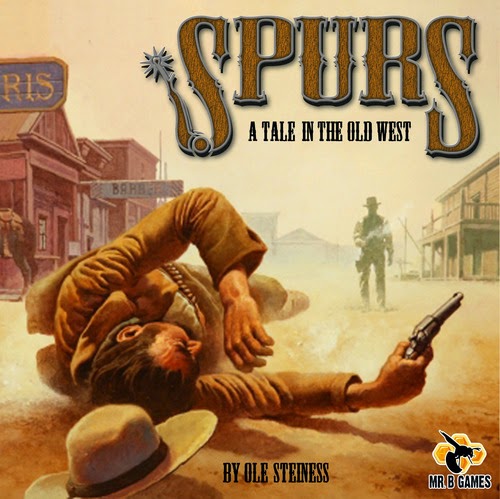 About this time, Brian made his WBC appearance, and we just decided to hit open gaming.  Paul sat down to re-teach us St. Petersberg, and we were joined by a 4th player...who also wanted to teach the game.  Once we got started, it came back quick enough.  Our 4th player won, but I made a strong showing with a building heavy strategy.  Brian and I hit the vendors for a while, and I picked up a copy of Villainous Vikings.  We had seen a demo of this game last year at WBC when designer Jeremy Stoltzfus had brought his prototype to demo.  Victory Point games had picked it up, and I decided to get a copy, including a promo captain.  Brian and I sat down in open gaming to give a 2-player game a try.  Fortunately, Jeremy was a few tables over teaching some other folk, so we were able to get quick answers to some rules questions.  We had a fun game, but were thinking it would bet better with more than 2 players.  After our game, Paul joined us along with Bill and Laurie from Nomad games.  Brian had purchased a copy of Spurs from them earlier, and we broke it out. Set in the Old West, with just about every trope you can imagine packed into the game, this was probably the purchase of the con.  The best part was watching Paul and Brian "gunfight" by drawing bullets out of their bags.  Brian pulled out the victory, I was a few points behind in 2nd place.  The last game of the night was another round of Villainous Vikings, with Paul joining in for a 3-player game.  Paul ended up running away with the game, but I did think it was better with more players.

Well, I had intended to do one short recap of WBC, but I think it's probably better to break it up into two sections....so next up, Saturday & Sunday, plus general thoughts on WBC.
Posted by Keith Ferguson at 6:20 PM